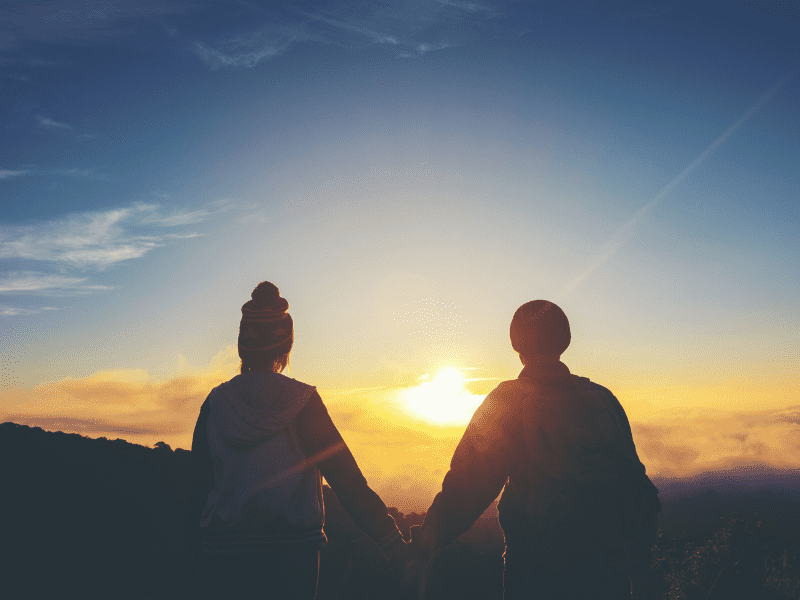 During the pandemic, I got interested in mending some of my older clothes. I researched how to darn and patch, not having done much of either in the past and quickly found many videos and tutorials on “visible mending.” Visible mending is not hiding that something has been mended – using a patch that shows off where there’s been repair or embroidering in a way that makes a sewn tear appear more beautiful than before. There is a Japanese form of mending pottery, kintsukuroi, in which potters heal a broken bowl or cup with gold, so the flaw is transformed into art.

Wouldn’t it be lovely if this could be the case for relationships? What if, instead of seeing only scars when we have hobbled back together after hurt, we could find a deeper richness after repair? During the pandemic, I have experienced rifts and tears in many minor and major relationships – some initiated by me, some initiated by others, and a few that seemed to appear out of nowhere. I’ve been able to ask for or make repairs in only a couple of those circumstances. Yet, as cliché, as it can sound, those relationships that we were able to repair are, in fact, richer than they ever were before. So why are some of those relationships reparable, some went by the wayside, and some caused great pain without any resolution?

When Repair Is Ill-Advised

Not all situations of hurt or harm should be repaired. Regardless of our fundamental capability as humans to be good, some relationships suffer from power imbalance and need to be gotten out of as soon as possible.

People who are systematically oppressed often try to repair situations we need to leave. As I often remind myself and my students, we can use any form of dharma teachings against ourselves. So before we go any further, I want to remind us all that repair is not only not always possible, it is at times dangerous to remain in a relationship, much less attempt to ask for or offer repair. As is often discussed in the prison abolitionist movement, some detrimental systems or situations aren’t broken – they are meant to function that way. If a system or relationship continuously harms you, that may be by design, even if unconsciously, not by accident.

The prefix “re” means to “do again,” and pair means to “be together.” If we weren’t together in the first place, it would be hard to pair us again. I have tried many times in my past to force a re-pair with someone when the fact is, there wasn’t a pairing to begin with. For instance, during the pandemic, I forged a zygote of a friendship as a white woman with a Black woman on social media. We “liked” each other’s posts, re-shared on occasion, and exchanged some private messages. But as is often the case for white women, I assumed too much intimacy with her, wanting us to be more “paired” than we were. This confused intimacy led me to make some mistakes – sending her a video I thought was funny that she thought was violent (which I would have tracked had I paid closer attention to her content) and, ultimately, commenting on one of her posts that generalized her talent as a Black artist.

I knew I had made a mistake immediately, because of a set of sensations I have learned to track in my time as both a student and teacher of Contemplative Psychology. My throat tightens, my face reddens, and my mind begins to race. I wished I had taken my time before I made the post; I wondered if I could remove it before she saw it, then the equivocating began – “It’s not that bad, it will be fine.” I spent the next 24 hours constantly checking my messages to see if she had replied, even to say, “Hey, that was not cool.” All of this is textbook behavior for me. My body and mind do the same reactions they have done since I was a child and harmed someone; however, what has changed is that I can now observe these reactions and – for the most part – not act on them, just notice them.

Once a week had passed, and I hadn’t heard anything from her, including no hearts or laughs at posts she would have normally responded to, I sent a brief apology, naming that I knew the comment was harmful and I was sorry.

I never heard back.

I obsessed over her non-reply for twenty-four hours, then it finally hit me: we didn’t have enough of a relationship to begin with.

It’s not that repair isn’t possible when we don’t have a relationship, but to expect her, as a Black woman, to do the emotional labor with a white woman with whom she hasn’t built trust is too much to ask. There wasn’t enough there to repair, for either of us. I have mostly let go of the idea that I can “make it up to her” somehow, and I no longer expect her to want to pair with me. Part of the skillful means, in this case, was realizing repair wasn’t possible.

We live in an era rich with transformative justice, relational wisdom, and mindful action. Out of the suggestions of people like Dr. Ken Hardy LMFT, along with the four-step practice we use in Karuna Training to heal when we split from the wisdom of our felt sense, I have a kind of “checklist” for myself, which we will try out during the Karuna Live offering.

I am not perfect at repair. But I’ve come to understand that no one is. If you have even made it this far, certain folks reading this newsletter would love to tell you how I hurt or harmed them and did a horrible job of mending. I regret some circumstances and wish I could have handled them with more skill. Equally, I can think of the times when others have caused more pain through attempts to patch things up than repair. This isn’t about repairing perfectly or being better at it than others. Not every rending can be repaired; not every crack can be made beautiful with gold. We transform together when we can stay awake and aware of both the hurt or harm caused and whether or not repair is possible. If repair is possible, which it isn’t always,  we need to practice skillful means to get through it.