What is a Wisdom Mandala? 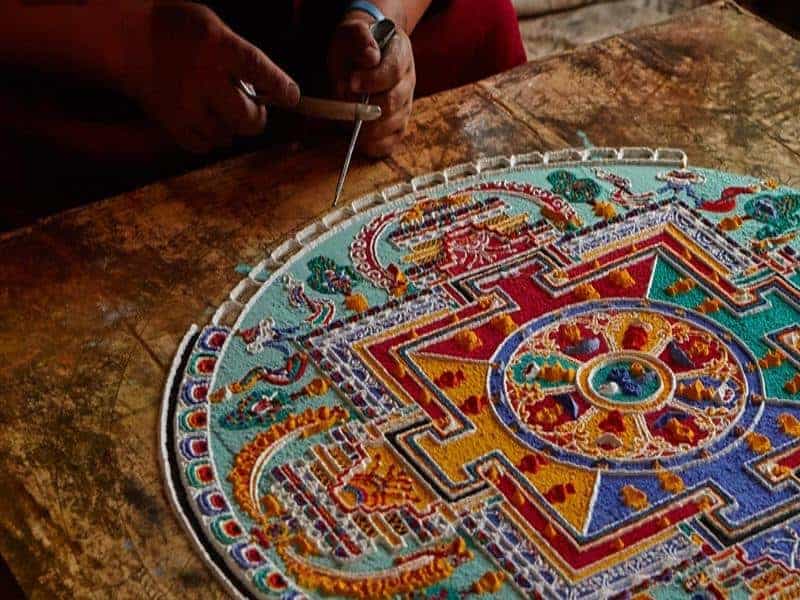 Mandala means anything with a center, a periphery, and a fringe. The word can include any society, group, or association and represents any kind of practice-oriented gatherings.

Karuna Training offers deep study into the practical aspects of the Five Buddha Families, the body, speech, and mind of the Mandala, both confused and wisdom aspects, and the spectrum of in-between, where most of us land. We begin with opening up to the energy of the elements: space, water, earth, fire, and wind -- the makeup of the entire universe. We study the unseen energetic aspects of each Buddha Family represented by styles of emotions, styles of knowing, and how the confused and wisdom manifestations of the energies are nondual realities we all exchange with daily.  We call them families because they’re so familiar.

In Karuna Training, we train ourselves to trust the intrinsic sanity of the world through studying the Wisdom Mandala of the Five Buddha Families. We learn to embody and befriend the energies, even when the energies and emotions are uncomfortable. We make friends with ourselves and become less reactive to the world with its impermanence and suffering.

The universe can be divided into five energetic areas that correspond with many related aspects. Humans have been diagramming their worlds for ions, which is another manifestation of a wheel or a mandala.  We study the Mandala’s emotions;  ignorance, aggression, pride, passion, and jealousy, which all innately possess basic sanity.  However, we cannot access the wisdom of energy if w solid and entrenched emotions rule us. Meditation practice is a critical skill in learning to inject space into our emotions, loosen them up so that we notice them, and become curious about these seemingly foreign entities we call things like; depression, feeling down, feeling angry, feeling vacant, etc.

The Five Buddha Family mandala is utilized to train more deeply in stabilizing one’s relationship to space. What is space anyway? We seem to throw that word around a lot in Buddhist circles and beyond.

Space is the densest element and the element from which everything emerges and dissolves back. Thus space is associated with the Buddha Buddha Family element and at the center of the Mandala. Space is also associated with ignorance, how we willfully space out or choose not to think or tend to things in life. However, the wisdom aspect of space is the all-accommodation of space, which holds everything and all the other elements.

To the East is Water and the Vajra Buddha Family, represented by a Vajra, a symbol of indestructibility. This indestructible aspect is applied to both the ability to see clearly and accurately - and a solid rigidity of mind. Vajra is associated with the east, as it is the rising sun and clarity of the morning and a new day. Vajra is also associated with our most boundaries energetic aspect, anger, and how we say ‘no’ when we need to say no. Vajra energy, like frozen ice, can become the most solid of mindsets, and at the same time, water thaws and flows and follows the path of least resistance. The wisdom aspect of Vajra is mirror-like in its accuracy of reflection, as a clear highland mountain lake.

To the South is the Earth element and the Ratna Family, which means jewel and represents innate richness and issues of worthiness and poverty. The Ratna family is about resources, having, consuming, generosity, and bounty. These aspects have to do with a sense of confidence and trust in the world and having enough, being enough. The Ratna family pertains to issues of death and decay and the cycle of birth, death, and rebirth.  Everything has its place and value globally, and we can learn to rest in the wisdom of equanimity.

In the West is fire, the Padma Buddha Family, represented by a lotus, Padma’s meaning. The lotus grows in the muck and slime of the bog and arises as a pure and pristine flower, all the while representing transmuting confusion into wisdom and pointing to the transformative virtues of fire. Fire is also associated with passion, magnetizing, the energy of the heart, heartbreak, and disappointment. Fire needs fuel and tending, and this very human type of energy is associated with love, desire, and attachment. The wisdom of the Padma family is discernment or discriminating awareness, which knows what to accept and what to reject.

In the North is the wind energy of the Karma Buddha Family, meaning ‘action’ as opposed to the karma of cause and effect. Karuma is the most efficient of energies, and the busiest mindsets get caught in comparative mind, jealousy, and envy. This energy is fast-paced and unpredictable, can be destructive, like fire or in combination with fire, however on its own, it can also be all-accomplishing.

Each of the Five Buddha Families, Buddha, Vajra, Ratna, Padma, and Karma, has infinite other associations and things to discover interpersonally in a retreat-like setting. The method of discovery is to join with the energies in wearing the color and also lying in the specific posture while staying attuned to the energy for an entire day of the retreat. This way we are mixing with others in the Karuna mandala and seeing how differently the energies manifest moment to moment in ourselves and also in others.

The Birth of Maitri Space Awareness

In early 1971 Chogyam Trungpa and Suzuki Roshi, the founder of the San Francisco Zen Center, befriended one another as two influential teachers, both occupied with landing Buddhism in the West. They discussed how many American students showing up at their respective centers displayed serious psychological challenges of one sort or another. They promised one another they would integrate contemplative practice and Buddhist psychology to bring people home to their innate basic sanity.

Unfortunately, later in 1971, Suzuki Roshi died. Chogyam Trungpa was heartbroken upon hearing the news of his death and reflected again on their shared commitment. Trungpa Rinpoche, at the time, was teaching an advanced seminar, and he noticed that when one of his students was ‘acting out’ with drunken behavior at a party, the space in the room began to shrink. “Little J.M. was dancing and singing his Tahiti (a kind of dance), and he wanted all of us to sing and dance, and nobody would cooperate with him. I felt very uncomfortable at the time because somebody might complain downstairs…then, there was a world outside and above us. I felt there would be a complaint from above and below and all quarters… I felt very claustrophobic, and at the same time, I enjoyed his company and his beauty. Suddenly I realized myself in a box. All of those complaints and paranoid ideas and everything… I suddenly remembered the bardo retreat techniques for relating with space…” (Chögyam Trungpa, unpublished talk at the Second Maitri Conference,1973).

Chogyam Trungpa drew from the extensive meditation training he’d undergone in Tibet as a Tibetan Tulku. In 1972 he founded the Maitri Psychological group with the dual purpose of first helping students explore the nuances of space and learn more about their mind; secondly, to create a community that could serve people suffering from psychological issues.

Trungpa designed five Maitri rooms to correspond to the Five Buddha Families, and he instructed specific postures for each room, to be held in the practice of Maitri space awareness. The Maitri postures were drawn from the ancient Tibetan Chod practices he’d accomplished in Tibet.  Originally there were only rooms, but in the early ’90s, Maitri Space Awareness teachers figured out how to make the practice more mobile by asking a group to lay in those same postures with five colored glasses.

Chogyam Trungpa summarized that what we label as psychological problems in the West are, in fact, issues concerning our relationship to space. For example, we often consider ourselves solid and the surrounding space to be empty and open; however, we’re the porous empty phenomena from a Contemplative Psychology perspective, and space presents itself as unmovable, speaking energetically. For example, when we learn the news of somebody’s death, it begins to permeate space in such a way that we cannot deny it. That is a gross example of how space is tangible. There is nothing there, yet the space of death is non-negotiable. Leaning into the solidity of space with natural openness and permeability evokes sanity. Trungpa came up with the term “space therapy” for this contemplative method.

Karuna Training has taken the Maitri method and works in an ongoing way with the wisdom mandala of The Five Buddha Families. We integrate the energies and their understanding into our body, speech, and mind. We center our curriculum around the potency of the practice and the mandala. If you are interested in joining in a cohort of Karuna Training and practicing Maitri Space Awareness with the Mandala of the Five Buddha Families:

We are launching a hybrid Karuna Cycle combining six Online Programs with four In-Person Retreats. The first weekend is scheduled for  Friday, October 29, Monday, November 1, 2021. All the in-person retreats will be held at Shambhala Mountain Center and use the Maitri Rooms, which did not burn down during last year’s fire. We are excited to be on home ground with the unique practice of Maitri Space Awareness.

By Mairead on April 11, 2022
By Miriam Hall During the pandemic, I got interested in mending some of my older clothes. I researched how to darn and patch, not having done much of either in […]
Read more

By Melissa Moore on March 18, 2022
Enduring is a word that evokes stress simply upon hearing it, so I apologize. However, it may feel as if we’re barely hanging on to the constant roller coaster of […]
Read more

How We Know What We Know

By Melissa Moore on February 11, 2022
Contemplative Psychology understands cognition as a state or experience of knowing. Cognition includes all conscious and unconscious processes by which knowledge is acquired, such as sensing, feeling, perceiving, recognizing, conceptualizing, […]
Read more